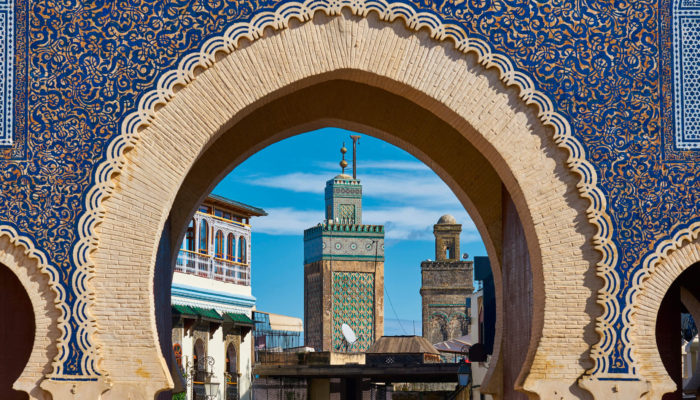 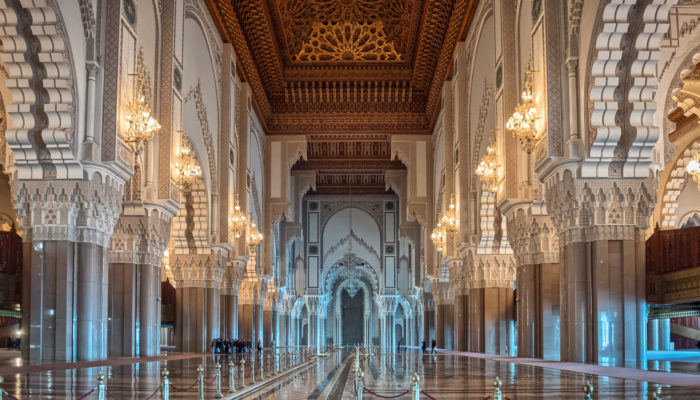 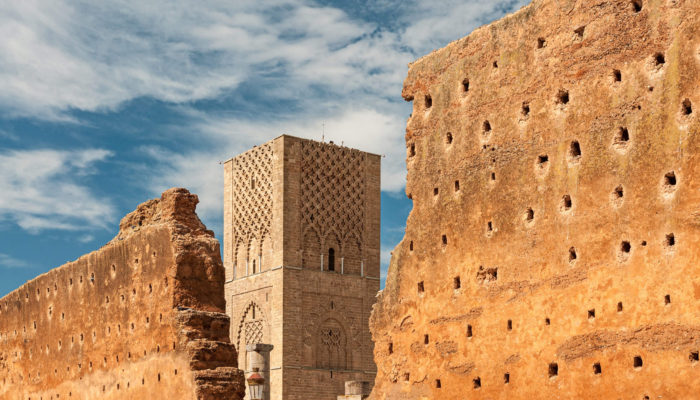 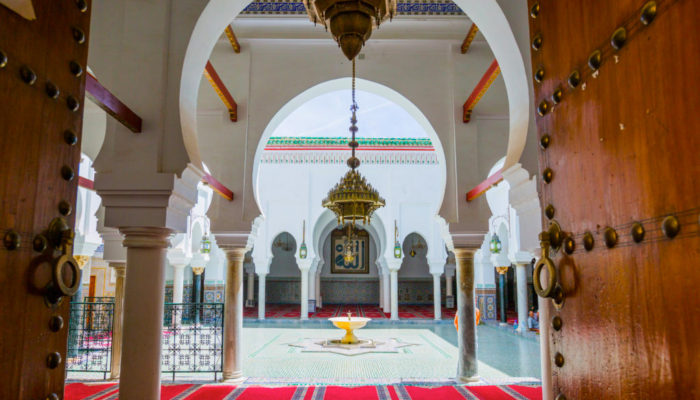 Breakfast daily, Lunch and Dinners as specified in itinerary

Welcome to Morocco.  Morning arrival in Casablanca. Meeting, assistance and begin your drive with your private driver and guide to Casablanca, Morocco’s largest metropolis and its commercial hub. Visit the stunning Hassan II Mosque, which accommodates up to 25,000 worshippers; its minaret stands as the tallest religious structure in the world. Visit the Mellah (Jewish Quarter) with its temples and synagogues such as Beth-El, the largest synagogue and an important community center. Continue then to the Museum of Moroccan Judaism, the first Jewish Museum in an Arab country.  Explore unique exhibits on the history and life of Moroccan Jews through the Ages. Drive along the wide boulevards, United Nations Square, the residential areas of Anfa and Ain Diab Corniche. Then, travel to the Moorish city of Rabat, capital of Morocco. Enjoy a Welcome dinner and overnight in Rabat. (D)

Begin your tour of Rabat with a walk through the Medina (Old Town) and the Kasbah of the Oudayas along with its palm-dotted Andalusian garden.  Continue to the Mohammed V Mausoleum, dedicated to the founder of modern Morocco, and grandfather of the current king. View the Mauresque-style Hassan Tower then proceed along the Mechouar, the wall surrounding the Royal Palace. Depart to Fes via the Imperial City of Meknes known as “Moroccan Versailles“ once the home of a thriving Jewish community. Optional Lunch at a local restaurant. See the monumental gate to the Medina, Bab El Mansour, then enter the Mellah, the Medieval Jewish Quarter. Drive along streets that still bear the original Hebrew names and past the former Talmudic Academy.  Stop at the ancient Roman site of Volubilis, explore the excavations dating back to the Roman Empire.  Arrive in Fes, for Dinner and  overnight. (B.D)

Enjoy the day touring Fes the oldest of Morocco’s Imperial Cities. Begin with Fes El Bali (Old Fes) the cultural heart of Morocco. Founded in the 8th century by Moulay Idris I, this imperial capital was a renowned center of medieval learning. Enjoy a walking tour through its narrow, winding streets. View the Karaouine Mosque with its roof of emerald green tiles, the Nejjarine Fountain, the Medersas, the tanneries as well as the arts and crafts souks (markets) Witness an authentic market, where local craftsmen are in action — working with bronze and pottery. Then, visit one of the pottery factories where hand-made pottery is still created as it was, hundreds of years ago. In the afternoon, tour the former Mellah (Jewish Quarter) inhabited since the 9th Century by an affluent and important Jewish community. Fes is among the best known cities in medieval Jewish history. Indeed, it was one the home of one of the most influential Talmudic scholars of all times, Rabbi Isaac Alfasi. Visit the Ben Danan Synagogue and the old Jewish Cemetery. This evening, enjoy dinner at one of the local restaurants in the Medinah. Overnight at your hotel in Fes. (B.D)

Depart Fes and drive along the Atlas Mountain Range to the Berber villages of Immouzer and Ifrane, a delightful ski resort, resembling a European Alpine village style and wellknown for its wood carvings. Continue via the Berber settlement of Azrou and the Bedouin town of Beni Mellal. It is here where you will behold magestic mountains, cascades, forests and wild life in their purest form. Optional lunch then visit the area of Rabbi Shlomo Amar OR you may opt for the modern 4-lane Highway Fes/Marrakech and skip the visit to Rabbi Shlomo. Continue to Marrakech for overnight at your hotel in Marrakech. (B)

Today a full-day tour of Marrakech provides an in depth look into  its rich Jewish Heritage along with other important historical monuments of the city.  The city tour includes visits to the former and current synagogues within the Mellah near which you will find an original Jewish cemetery, several centuries old. Enter through one of the gates into the Medinah and visit the 16th Century Saadian Tombs. Continue to the Bahia Palace with its harem and open courtyards. Time permitting, visit the enchanting Majorelle Gardens located near the new city. Optional lunch then enjoy an afternoon walk through Marrakech’s famous markets – each with its particular item: Leather, spices, jewelry etc… Exit the markets at the famous Djemma El Fna Square, an fascinating combination of stalls, strolling jugglers, story tellers, snake charmers and fortune tellers. Optional mint tea at cafe’s terrace overlooking the square, and one of Marrakesh’s landmarks : the Koutoubia Tower which is also a repository for sacred books. Tonight, dinner at a local restaurant with belly dancer show at Jad Mahal. (B.D)

Travel to Essaouira, formerly known as Mogador, a quaint fishing village with Portuguese influence and an attractive coastal town, rich in history. It boasts islands that were inhabited in early 7th century BC. Before reaching Essaouira, stop in at a Women’s Argan Oil Cooperative. The Argan Tree is an amazing tree which only grows in southern Morocco! Once discovered, argan oil became a highly sought after commodity around the globe – it is mainly used in the beauty and health industry. Locally, it is as a culinary product for many famous Moroccan dishes such as couscous, salads and amlou spread (which is made of argan oil, almond paste and honey). Upon arrival at Essaouira, enjoy lunch on your own. Then, visit the bustling fish market, the ramparts and bastions, which served as the location for the Orson Welles film version of Othello. In addition, the fortifications and the excellent factories, which sell locally carved and polished thuya wood products. Today, the town is considered a resort area and is bests known for incredible windsurfing. Step back a generation ago, and  there were thousands of Jewish inhabitants in the town. Today, few families remain and when you visit the Mellah, you will find the blue and white painted houses with the Stars of David above the doorways of former Jewish homes. Essaouira is the site of an annual pilgrimage to the grave of Rabbi Haïm Pinto, who died in 1845. His home and synagogue, situated in the Mellah, are preserved as a significant historical and religious site. Don’t miss a visit to Bayt Dakira or the House of Memory  a Jewish museum located in the Jewish quarter that seeks to preserve and enhance the Judeo-Moroccan memory as part of the King Mohammed VI’s ongoing effort to revive the country’s Jewish heritage. Return to Marrakech for overnight at your hotel. (B)

Following breakfast, depart to Marrakech International  airport  for your flight back home with unforgetable memories. (B)

Please contact 1.844.947.7235 to speak with an expert about pricing for this program or email info@isram.com